In this fast-growing world, there are almost all people using the internet. Be that the smallest thing to search for something or the biggest thing to order online, everything is dependent on the internet. The Internet is constantly being used. It is possible that it will be weak and not respond as required. Hence, testing your internet speed is important before you do anything. Testing your Internet speed is always good. By testing your speed with Internet Speed Test Apps, you come to know where your internet speed stands.

We have given you the 8 best Internet Speed test Apps that will help you check your internet speed and address the issue. Go through them and choose what suits you best. 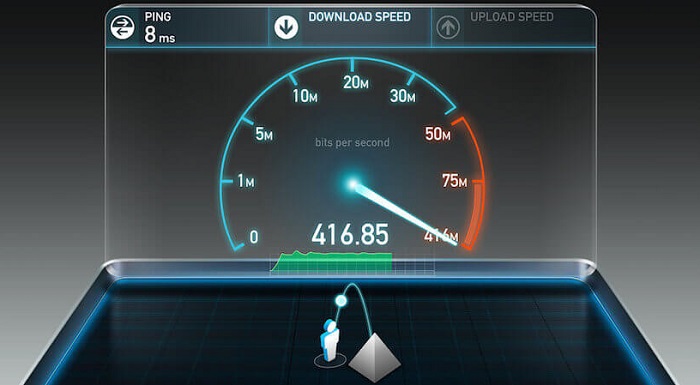 You can easily see your upload and download speed and that too in Mbps. Not only that the server you are trying to download or upload from and also the provider you are using, everything will be visible. It is very easy to test your internet speed. Just download the Ookla speed test app, create your account in it and get the results of your internet speed in your own locality. From the speed test, you will come to know how fast and efficient your internet is working.

You must be thinking testing internet speed might cost you some amount, but this is absolutely free without you spending even a penny, and also by sitting at your home you can do the speed test. The Ookla speed test app is supported by all the devices such as web, android, mac OS, windows, google chrome, and Apple TV.

The benefit of using SpeedSmart is that whenever you test the internet speed it saves all the results that can be used in the future for you. The cherry on the cake of the SpeedSmart is that it has a user-friendly design that tends to attract many people and make them fall in love with it.

SpeedSmart also supports web, iOS, or Android and you can test your internet speed from any.

Bandwidth Place speed test is very efficient and is used by many people. On top of it is supported by all the devices. The speed test works smoothly on any device you test.

Speedcheck Internet Speed Test is very unique from the others and quite popular too. It stands out by not only giving the internet speed but also by troubleshooting slow or unresponsive internet. Due to that, it helps us to improve the sluggish internet.

Devices like Android, iPhone, or use the web to check your internet speed. It has a site version that gives add on benefits to you by providing a guide on how to interpret your speed test results.

FAST internet speed test app is created by Netflix just to make your life much easier. Because most of the time people tend to depend on mobile for streaming their favorite movie or series. Using the FAST app you can easily stream your favorite movie and series. The FAST app is supported by Android, iPhone, and the web.

Download it and enjoy its upload speeds, download speeds, latency, your current location, and IP address. The FAST app also shows your ISP that is the internet service provider’s server location.

Doing this will make sure that everything is perfect and ready to post. For Android and iPhone users download the Meteor Speed Tester app quickly and enjoy its features.

Until next time, See ya! Ciao!